Writer’s comment: For a chemical engineering student, the design and optimization of reactors is very important, especially in the petrochemical industry. To get an idea of this concept, I chose to write about methanol reactor optimization. My senior design project was very similar to this topic and I used that as a basis for my writing.  I also used previous chemical engineering knowledge and coursework on reactor design and kinetics to connect key ideas throughout the report.  My approach to writing this technical report was to first brainstorm major concepts and ideas relating to reactor optimization and put them into writing. Then I began to format the appropriate sections and schematic diagrams that belonged in the report.  The revising process, which was difficult and required much planning and insight, focused on the concept of SCC: simplify, clarify, and correct. At the end of the report, I compared what I had written to my senior design project and made sure that everything was coherent and reasonable. This made my report detailed, but also easier to read.
-Elton Amirkhas

Instructor's comment: Elton Amirkhas’ technical report illustrates the excellent value of combining industry internship experience with a University Writing Program writing-in-the-professions course.  Elton wrote this paper to fulfill the technical report assignment in my UWP 102E (Writing for Engineers) class.  For this paper, I set the standards for rhetorical strategy, document format, and sentence-level style.  But I allow my engineering writing students to select an industrial situation that involves a real-world product or process improvement.  Students who have not worked in industry have to “fill in the blanks” using library research, networking, and, alas, speculation, but  Elton, who has worked as an engineering intern, was able to enrich his paper with application-specific technical details. This technical report showcases many of the problem solving dilemmas that professional chemical engineers face. Elton’s topnotch write-up of his process improvement project for Chevron Corporation required him not only to document the project objective and solution criteria given to him by his boss, Mr. Karpay, but also to complete the problem statement by stating a set of complementary assumptions based on his own critical thinking.  Thus, this report shines with professionalism, advanced analysis, fine writing, as well as academic savvy.
-Brad Henderson, University Writing Program

The Chevron Corporation Research and Development Center has discovered that methanol can be used as an alternate fuel source.  The marketability of and demand for methanol has been on the rise for the past decade.  As a result, Chevron wants to work against its competitors to produce purer methanol and to sell it for profit.  The Plant Design Division has decided to purchase and install a new stoichiometric methanol reactor to improve methanol production.  A request was made to optimize the reactor at the methanol plant in Richmond, California.

Mr. Karpay, the senior process design engineer at the plant, asked my group to optimize the reactor.  The reactor was using natural gas as a key reactant.  The methanol production target was 500 mol/hr.  Chevron Corp. added economic cost constraints for the reactor.  The several key parameters investigated were as follows: reactor volume, reaction rate, reactor temperature, conversion, and methanol output.

We used PID (proportional-integral-derivative) and Cascade controllers to monitor and collect data for the reactor under nominal operating conditions.  Moreover, we noted that catalyst suppliers reported that the catalyst being used degrades at 610K.  Simulation software was used to simulate operating conditions and to calculate economic cost.

We concluded that the most viable alternative for optimizing the reactor was to increase reactor temperature to just below that of the catalyst degradation temperature.  As a result, the economic cost was $24.9M/yr with a conversion of 79%.  The corresponding required reactor volume was 171.3 L with a methanol output of 500 mol/hr.  That of natural gas was 888 mol/hr.

Chevron Corporation has been researching and developing alternate fuel sources for the past two decades.  Chevron believes that methanol can be used as an alternate fuel source and possibly be used in many chemical applications such as fuel cells.  In 2003, Chevron designed a new methanol production plant near Richmond, California, producing roughly 350 mol/hr of methanol.  Just recently, a new stoichiometric methanol reactor was installed at the plant to increase the production of methanol.  This reactor was installed to improve methanol output and to increase methanol production from 350 mol/hr to 500 mol/hr across a 330-day/yr operational period.  The methanol reactor was using two main reactions, the Fischer-Tropsch reaction and the Water Shift reaction, to produce methanol.

The capital cost of this reactor was estimated to be 20 million dollars, with maintenance costs ranging from $400,000 to $600,000 per year. The cost of the reactor was based on sizing parameters, feed quantities, reaction temperatures, and available kinetic data from suppliers.

Mr. Karpay, the senior design engineer in the plant design sector, suggested that the methanol reactor be modified to accommodate higher methanol production rates and to accomplish higher conversions, preferably over 65%.  Mr. Karpay explicitly stated that capital costs should be considered along with any related costs in optimizing the reactor.  Heat management costs and utilities costs should also be considered.  Catalyst suppliers provided kinetic data, which enabled our team to size the reactor more efficiently and to monitor reaction rates.  We assumed power law kinetics governed the system, in order to understand the catalyst and its influence on the reaction rate.  Chevron provided our team with cascade controllers and PID (proportional-integral-derivative) controllers for measuring the necessary parameters.  Chevron gave Mr. Karpay specific production targets to create grade AA methanol.  The methanol production target was 500 mol/hr with a reactor temperature no greater than 610K.

The following two reactions are used in industry to make gaseous methanol:

The first reaction occurs in the methanol reactor, while the second reaction is an alternative.  The kinetic rate law, which our team assumed to be written in the power law form3, is as follows:

There are three viable alternatives to optimize this methanol reactor.  These optimization schemes are as follows:

2.     Resizing the reactor at a fixed temperature can significantly improve conversion and methanol production.

3.     Increasing reactor temperature just below the catalyst degradation temperature of 610 K will improve the kinetics thereby increasing the conversion of methanol and its production.

According to the manufacturer, “These controllers compare a measured value from a process with a reference set point value.  The difference or ‘error’ signal is then processed to calculate a new value for a manipulated process input, which . . . then brings the process-measured value back to its desired set point.  The PID controller can adjust process inputs based on the history and rate of change of the error signal, which gives more accurate and stable control.  It can be shown mathematically that a PID loop will produce accurate stable control in cases where other control algorithms will either have a steady-state error or will cause the process to oscillate.”

According to the Invensys Eurotherm website, “Cascade control is used to enable a process having multiple lags to be controlled with the fastest possible response to process disturbances including set point changes.  Here you control a secondary, more responsive process that lies within the overall loop and influences the main process.”

The PID controllers were also used to change and measure reactor temperatures.  These temperatures fluctuated from 450K to 670K over a one-day period.  As a result, the reaction rate was known as a function of both feed flow rate and temperature.  Recall that pressure drops in the reactor were neglected.  Upstream processing units were installed to accommodate any pressure changes of the streams coming into and out of the reactor.

The collected data was further analyzed and the reaction rate was clearly dependent upon feed flow rates and temperature.  Further analysis was done using Process Design simulation software.  The conversion of the reactor was investigated as a function of reactor volume, temperature, and feed flow rates.  Methanol flow rates were also collected throughout the day.  Maintenance costs and other costs were determined from simulation software. 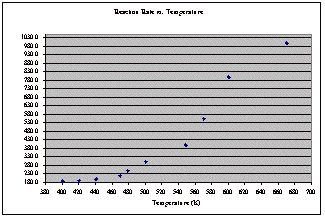 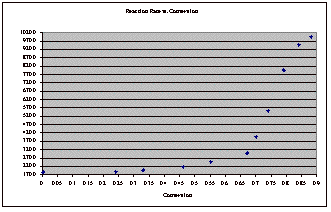 Figure 2: Inverse Reaction Rate as a function of Conversion
Note: The area under the curve gives the reactor volume necessary for a desired conversion. Higher conversion implies a larger required reactor volume.

Table 1: Economic Costs under different operating conditions
Note: These costs incorporate maintenance and utilities costs. The maximum attainable conversion was 0.88 or 88%. The abbreviation M is millions of dollars. Costs were based on reactor operation only.

The most attractive optimization scheme is at the conversion of 79% (see Table 1).  The catalyst used in the reactor degrades at 610K and any reactor temperature above 610K will destroy the catalyst.  At 600K, we observe an overall cost of $24.9M/yr with a required reactor volume of 171.3 Liters.  The most viable alternative for optimizing this reactor is to simply increase its temperature just below that of the catalyst degradation temperature of 610K.  Notice that at 79% conversion, methanol production is exactly 500 mol/hr, which is our production target.

Using temperature and volume we can dictate the appropriate conversion of methanol.  Our competitors have only been able to achieve 70% conversion.  Using the already mentioned scheme, we can achieve more.  The natural gas flow rate at 79% conversion is 888 mol/hr, which is roughly 14,236 g/hr or 14.2 kg/hr and this can easily be supplied.  In general, a feasible route for optimizing the methanol reactor requires finding a reactor temperature that can achieve the highest conversion, while, at the same time, including reasonable reactor volume, satisfying the methanol production target, and not degrading the catalyst being used.

Therefore, using both PID and Cascade controller devices, both monitoring the performance of the reactor under various operating conditions, yielded the best results with little variation at 79% conversion.  Overall, the third alternative is the most productive for achieving both the requested production target of 500 mol/hr and a conversion over 65%.

Mr. Karpay helped us greatly in optimizing this reactor by providing data and software.  We now have demonstrated that the methanol reactor can be optimized at a minimal cost, with the highest conversion, with a reasonable reactor temperature, and with preservation of the present catalyst.

In sum, Chevron has the opportunity to produce grade AA methanol and to enhance methanol’s applicability in the chemical industry.  Chevron can now expand its research and development sector into making fuel cells and using its methanol to power them.  Fuel is an asset that humanity cannot take for granted.  Realizing this, Chevron is currently using all of its resources to generate energy for future vehicles that will promote a cleaner environment. 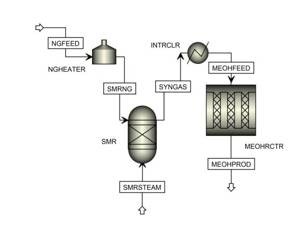